"Who told you you were not wearing clothes?" 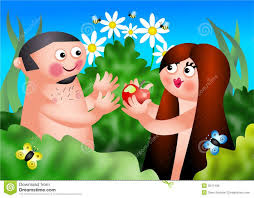 I'm at the point in the new job where I wonder if they'll figure out I'm a fraud. You know, I got through the interviewing and vetting process merely on charm and dumb luck, and now, when push come to shove - I won't know what the hell I'm doing. I suppose it's the adult equivalent of dreaming that you've shown up for school naked.

Either way, it's scary.

Remember in the Garden of Eden when God comes to visit (I mean - how ridiculously awesome would that be? After dinner, God drops by for a glass of wine or a gin and tonic, and you chat. Maybe there's a new bird that needs to be named, or a new flower design He's been noodling with....) Anyway, God comes to visit and Adam and Eve hide, because they are naked.

"Who told you you were naked?"

It struck me that my feeling as I headed into work today, worrying about my competency, was not unlike the scene in the Garden. Nothing had changed. God was still omnipotent. Adam and Eve were still naked, and everything was cool.

Until they tried to outsmart God. Until they hid (like you can hide from God??) Until they thought, "What if things are not what we were told they were? What if it's something else? Something WE'VE thought of, and the big guy hasn't?"

They somehow figured that things were not as they had seemed. God had not been honest with them. They were not who they thought they were.

And things went downhill from there.

As I was praying and pondering my own irrational fears about work, I thought of this. I need to rely on the knowledge God has given me, the person He created me to be, the opportunities He's afforded me.