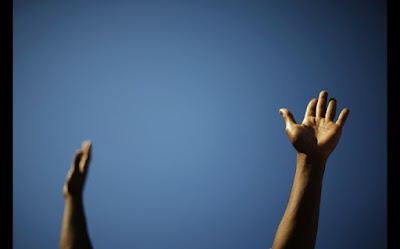 He's also in a lot of pain, emotionally. For years, he made horrendous choices, and those choices had consequences not just for him but for people he loved.

He is home for a couple of days, to take care of some of those horrendous choices. Last night,  he sat and talked with me for hours, pouring out his heart. It's probably the most honest conversation we've had ... maybe ever.

This huge kid is hurting so badly. The bad choices and their consequences play like a movie reel in his head, he told. How can he turn them off? How can he make up for the things he's done? When will he feel forgiven?

Confession, he said, helps - sort of. He still feels a burden for what he's done.

I told him that our feelings are far too often unreliable. If I acted on my feelings, I would have walked out on my family years ago - it was just too  hard. I felt like I couldn't handle it. But, we act on what is right, making wise choices by God's grace, not by our feelings.

I talked to him about saints who made truly terrible choices - the Apostles and St. Paul. Yet they are men we look to as powerful examples of faith.

In my office, where we were talking, I have a crucifix. I kept pointing it out to my son, reassuring him the Christ had already taken on his sins and that he was forgiven - so long as he was truly sorry and confessed those sins. He might still have a heavy heart, but the reality (not his feelings) is that Christ loved him - and all of us - so much that He was willing to die a horrid death, a most painful death, a death He did not deserve. The reality is that death saves us.

My son is still so young, and these are such massive burdens and issues for a young man to struggle with. I told him that I covered him (and his siblings) in prayer every day. My prayerful desire is that this honest conversation is just the beginning of a new path for him - one where he can discover a deeper faith, redemption and hope.
at February 01, 2016