Broken Mary: Putting the pieces of faith back together 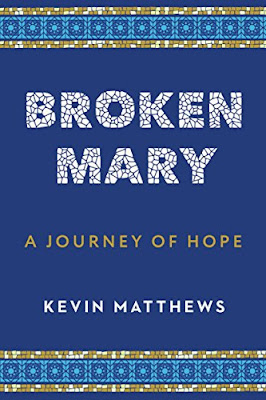 I just finished reading "Broken Mary." You should read it, too.

When I was in high school, music was a HUGE part of my life. However, I depended on my friends being able to scout out the really good stuff: the Ramones, Bruce Springsteen, U2. I lived in a rural area, and the only radio station my mom and dad listened to was WJR out of Detroit. Yeah...

Then I got to college, and my new friends introduced me to WLAV out of Grand Rapids. It was the mid 1980s, and great music seemed to be everywhere - and LAV had it all.

Kevin Matthews was the morning guy. He was raunchy and risky and funny and clearly loved the music. His fans were "Kevheads" and they were wildly devoted to him.

It's more than 30 years later, and LAV still gets played in my house. It's different now: "classic rock" which sort of translates into "stuff you listened to 30 years ago." My tastes and sense of music has changed and broadened, but LAV is still there.

But Matthews isn't. He was diagnosed with MS a few years back. I remember my husband telling me. It was like hearing one of your favorite cousins was sick. I had a family member with MS, and knew how devastating it could be. And Matthews was off the air.

Then one morning, not too long ago, I had the morning news on while I was getting ready for work. And there was Matthews. And he was talking about God. And Mary. And being Catholic. and my beloved Franciscan Sisters of the Eucharist. WHAT??

He was talking about his journey of faith, one that zigged and zagged and plummeted and rose again from a dumpster (literally.) You should read his book.

I will tell you one funny thing. One of the Franciscan Sisters, whom I know well, teaches at a local university. She is a scholar - loves Shakespeare and the works of the English poets like Donne. And she wrote the foreword as editor to Matthews book.

As I mentioned before, Matthews show was raunchy. And in the telling of his story, he (politely as possible) had to acknowledge some of that. I had a picture in my head of him struggling to find a way to say certain things in a manner that would not cause his nun-editor a heart attack. Now, again, I know her well, and I know she is not one to shock easily, but I felt a bit sorry for Matthews. I'm sure he thought he was going to make this poor little nun collapse in horror.

Go get the book. Then share it with someone. It's a great little book.