Love Me Some World Religions 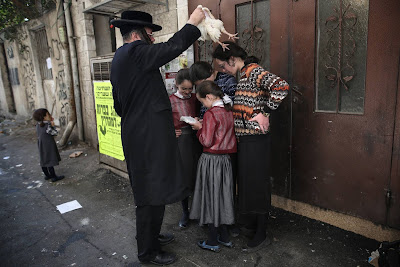 A long, long time ago, I went to college. This was back in the olden days when a slightly naive but studious Catholic girl didn't have awesome choices like Magdalen College and St. Thomas More College. My parents dropped me off at Alma College, which was founded by the Presbyterian Church. A priest friend of theirs told them he felt confident that my faith life would be safer there than at any "Catholic" college available to me at the time, as most of them had joined in the post-Vatican II meltdown of the '70s.

I had planned to be an English major (and graduated with enough credits, but did not fulfill all the department requirements.) But I had a true epiphany as a freshman, in a class called "Religion in America." One of our readings was Martin Luther King Jr.'s "Letter From Birmingham Jail." It knocked the breath out of me. I had never heard the Gospel proclaimed in this way - the Word of God as a basis for justice. (Gentle reader: Yes, I know now that the Catholic faith has a rich history here, but keep in mind that I was only 18. A mere babe.)

I decided then I needed to delve into religion in a deep way. I declared my major: religious studies! (A family member was a bit worried about my faith, but - thanks be to God - I was protected against any desire to change teams. Likely this was due to my mother's prayers.)

Please know: a major in religious studies makes one a great candidate for:

I chose A. Never regretted that either. I have always been and remain truly fascinated at how we humans view ourselves and God. I love the quirkiness of my own faith (Incorruptible bodies? Booze? Folk Masses? Come on: this is great stuff!) and the quirkiness of other faiths, along with the heady theological questions and answers of the heavy-duty life questions faith attempts to answer. Graduate school took me around the globe: Japan, Africa, India.

Which leads us to the picture that accompanies this blog post.


JERUSALEM, OCTOBER 10, 2016: An Orthodox Jewish man swings a chicken over his family as they perform the Kapparot ceremony in the ultra-Orthodox neighbourhood of Mea Shearim in Jerusalem. The Jewish ritual is supposed to transfer the sins of the past year to the chicken, and is performed before the Day of Atonement, or Yom Kippur, the most important day in the Jewish calendar. / AFP PHOTO / MENAHEM KAHANA

When I see a picture like this, it stops me cold. I want to know more. I want to know this family, eat at their table, talk about our shared beliefs. I've never had a dead chicken swung over my head, but I see why it's done. Yes, I still love to learn about religion, and I (more than just a little) want to have a dead chicken swung over my head and celebrate Yom Kippur.
at October 13, 2016