Faith As A Crutch 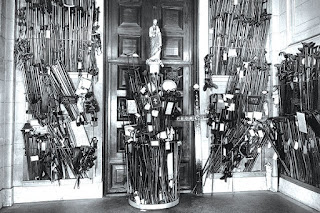 One of my sons has taken up atheism with a vengeance. It's a bold and provocative life: claiming God does not exist. That way, you have nothing to live up to. Wild, huh?

He accused me, on Christmas Day, of using faith as a crutch. At first, I was offended. But now: yeah, it's a crutch.

When I was 16, we took a family trip up through Canada and down through New England. One of our stops was the Oratory of St. Joseph in Montreal. In one of the chapels, and lining the hallways, were hundreds, if not thousands, of crutches and canes cast off by infirm visitors who found some form of healing there. It was rather remarkable to see very old crutches along side aluminum ones - clearly, this had been going on for a long time.

When I lost my mom, I was holding it together at the funeral home pretty well until two of my oldest and dearest friends came in. I literally fell into their arms. And I remembered back just a few short years before, when one of those friends lost her husband quite suddenly, that I had done the same for her.

My husband has been a crutch for me, and me for him - many, many times over our past 30+ years. My oldest sister propped me up when one of my daughters faced a horrible time in her life.

There have been times when the only thing that gets me through the week is the Eucharist. I've also found incredible solace in the Anointing of the Sick. When my kids were younger, a yearly retreat was a balm for a weary soul.

I am a cripple. I am sinful. I am not "all there," and I won't be if and until I reach Heaven. I say and do stupid and mean things. I know each of the seven deadly sins quite well, and have only a nodding acquaintance with the virtues. Left to my own accord, I would be the moral equivalent of the bum sleeping off a bender in the park, only to collect a few more bucks and head off to get more Five Buck Chuck.

I am simply too sinful to make it on my own. I need not only a crutch, but a wheelchair and an ambulance and my own concierge-physician on call 24/7.

Thankfully, I have that. His name is Christ and His Church is Catholic. And I'm happy to limp my way into Heaven, so long as I get there.
at December 28, 2016