Politics Is Driving Me To My Knees 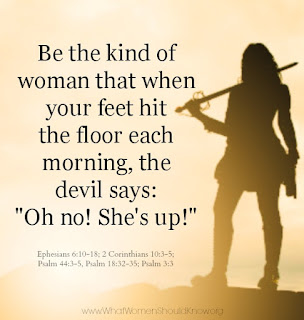 I felt (like many women) that Saturday's marches were only for pro-abortion, liberal women. (And judging by the speakers in DC, rich ones). Women dressed as female body parts chanting ancient abortion slogans were not speaking for me or millions of pro-life feminists. And no, that's not an oxymoron.

I turn, as I often do, to the writings of St. Teresa Benedicta of the Cross. As a female and a Jew in early 20th century Germany, she knew a thing or two about being discriminated against. She also knew, as a teacher of young women, how incredibly gifted women are. Never for a moment did she suggest that we are the weaker sex.

Just so, woman’s soul is designed to be subordinate to man in obedience and support; it is also fashioned to be shelter in which other souls may unfold.

The soul of woman must therefore be expansive and open to all human beings; it must bequiet so that no small weak flame will be extinguished by stormy winds; warm so as to not benumb fragile buds; clear, so that no vermin will settle in dark corners and recesses; self-contained, so that no invasions from without can imperil the inner life; empty of itself, in order that extraneous life may have room in it; finally, mistress of itself and also of its body, so that the entire person is readily at the disposal of every call.

My only thought at this point is to pray. I'll pray for our elected officials (even if I didn't elect them with my vote.) I'll pray that any woman facing a crisis pregnancy has the support and help she needs to make a decision for life for her child. I'll pray for those in the abortion industry that they may have a change of mind and heart.

I'm trying really hard at this point to keep my mouth shut on social media because I know it is just adding to the noise. Pray for me.
at January 23, 2017