Hate your boss? Hate your job? Welcome to the club 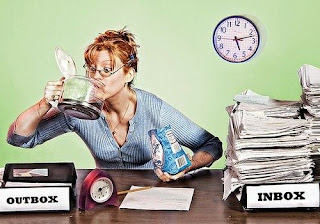 I've got a relic of Bl. Solanus Casey over my desk. I pinned a note next to it: "'Sacerdos Simplex' yet still a saint." He strikes me as a genial fellow, but he must have felt some sense of disappointment when he finally graduated, was ordained and then told, "Yeah, you can't do a bunch of priestly stuff. But you can answer the door!"

While St. Damien of Molokai volunteered to head to Hawaii and care for the lepers, he really had no idea what he was getting into. The living conditions when he arrived were about 7 steps below squalor. Over the years, he helped his people build homes, a church, organized choirs and planted gardens. I'm sure he had his moments - he could not possibly have dreamed as a child that he would travel to a tropical paradise, only to find it full dreadfully sick people.

Whenever a pope is elected, he is asked if he will serve. If he assents, he is taken to the Crying Room, where 3 sizes of white robes await. And those men must surely cry, for no one wants the job of running Vatican City and leading a billion Catholics who all have differing views as to who the pope should be.

We all deal with stress. At the office, it might be an obnoxious or clueless boss. Maybe it's a team member who never pulls her own weight, but is happy to take credit for success. Maybe it's an office manager who is just a little too OCD; every time someone fails to put on a fresh pot of coffee there is a slew of emails reminding people that this is NOT the way we run things around here, people!

It's been going on ever since Adam and Eve decided to do what they've been asked not to:
In toil you shall eat its yield all the days of your life. Thorns and thistles it shall bear for you, and you shall eat the grass of the field. Until you return to the ground, from which you were taken; For you are dust, and to dust you shall return.

I keep telling myself I'm blessed to have a job (with the voices of my Depression Era parents ringing in my ears.) I'll watch an episode or two of The Office, get a decent night's sleep and be back at it again. I'll also be asking a few saints to run interference.
at January 03, 2018