Wise as a serpent, gentle as a dove


When our family started visiting "our Sisters" once a month or so, I was assigned the job of cook. When we had work days, Ed and the kids would be out raking leaves or planting bulbs or picking apples, I'd be cooking hot dogs and making applesauce for the 50 or so folks who'd be working with the Sisters that morning.

My constant kitchen companion in those days was Sister B. Sister B has an education in pharmacology, and despite being retired, she uses that same exacting care with quilting, cooking and dozens of other things that fill her days.

Sister B comes up to about my chin, which is to say she is petite. She has silver rimmed glasses that sit properly on her nose, a quick grin and smiling blue eyes. With the soft voice, she always asked me far more questions than I asked her, as we cooked and prepped the lunch.

It would be easy to brush off Sister B as a "nice little old nun." I know, because that's what I did. I got accustomed to her sweet voice and cheery manner. I like that she asked me lots of questions - nothing was ever about me in those days, when my kids were small and their needs large.

It was probably a year or so later, Dear Husband and I were with a number of other couples, sharing an evening discussion with the Sisters. Sister B and I ended up at the same table. As the evening progressed, I was struck by how wise Sister B was. Her comments were insightful. I was amazed at her thoughtful contributions to a rich discussion.

Later, as we were driving home, I was telling Hubby about this. Finally, I knew what Christ meant when he told his followers to be wise as serpents, yet gentle as doves. And he was good enough to illustrate his point, via my relationship with Sister B. 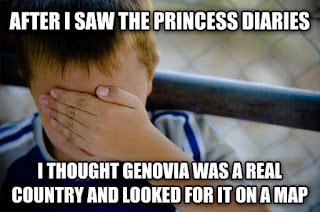 Cardinal Angelo Bagnasco is the Archbishop of Genoa (which is a real place as opposed to the kingdom of Genovia.) His thoughts regarding wisdom resonated with me. And even though Sister B still lights up when she sees me, and I still believe she is a "nice little old nun," I also know she is so much more.

Cardinal Bagnasco: May the Lord help us to return to wisdom, that wisdom that is not afraid of God, that sees in Jesus its true hope, that recognizes Christianity - far from mumbled obscurantism - has introduced an element of spiritual freedom into human life that is capable of elevating individuals, peoples, and nations. The world crises is first of all a spiritual crisis. Failure to admit this signals a failure to comprehend the seriousness of things! We need to start thinking with our heads again! Faith does not eliminate intelligence, but rather seeks it, stimulates it, opens it to reality. Faith asks intelligence to actualize it in history, it encourages intelligence to reawaken from sleep and react to the world of slogans and lies.... All true greatness is born from grace - this we must invoke, of this we must live. - homily on the Feast of St. Lawrence, 8.10.18