Job, Jacob and the Fine Art of Wrestling With God 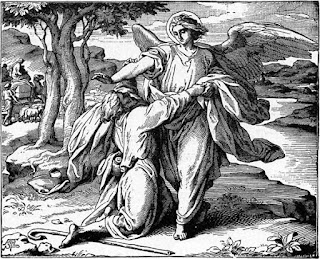 Even if you're not very familiar with Scripture, you likely know (roughly) the story of Job. Job, a "righteous man," finds himself in the middle of a wager between God and Satan. God allows Satan to tempt Job into despair, but Job remains faithful.

Jacob's story is a bit different. From the get-go, Jacob is a leader in Israel. He helps Moses. He is a soldier. Nearly fearless.

Your plans do not match God's plans.

You let God know (often boisterously) that THIS is not your plan. [This stage can last anywhere from one day to 64+ years, depending on how pig-headed you are.]

You find yourself sitting on top of a big pile of nothing with God - literally - shouting at you.

AND THEN, you begin to consider the possibility that perhaps you should consider God's plan.

I've spent most of the last year wrestling with, boisterously shouting at God, refusing to cry "uncle" as my arm is being twisted. I'm thinking, "Go ahead, God. I got a really high pain tolerance." (That sounded much more Dirty Harry-ish in my head.) As if I can outlast God.

Why do we do it? Why are these wrestling matches part of who we are? Why isn't it all just a bit...well, easier? Surely, God gets just as tired of this boisterous and loud dissent?

Maybe He made us this way. (Of course, willfully turning against God is sinful.) But these times of wrestling and yelling and saying, "I KNOW!!" while slamming an imaginary door - maybe it's our Parent's way of bringing us to the Truth. He's not going to gloat: "I told you so!" but He won't take short-cuts with us either.

Maybe it's a "get it out of your system" thing, or a rite of passage that we all have to navigate.

Anyway, if you're wrestling with God about something, consider being quiet about it with Him. See where He is leading you, instead of the other way around.

Or spent 64+ years wrestling with Him. Same thing, either way.