There is a bike in my dining room.... 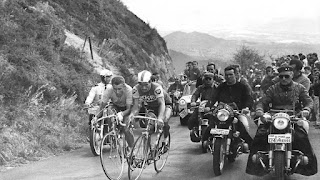 Really. There is a bike in my dining room.

DH got obsessed with cycling after we bought our first house. You know: young, married, no kids...we could indulge. He road a century race or two (those are 100 miles) and then decided to do the 24-Hour Challenge, which is pretty much what it sounds like.

Having a bike when we lived in a house was no big deal. It could go just about anywhere. (It found a place of honor in my hubby's den.)

Now, it's in our dining room. Why? Because DH wants it close by.

See, about 3 years ago, he had minor heart surgery that turned into a 3 week hospital stay. His right arm was badly affected by the surgery and he now has a great deal of nerve pain. After surgery, riding the bike became an exercise in pain control - every bump and dip added pain to his ride.

He doesn't want to give it up - it's been a passion of his for 30 years. But his bike is too expensive to lock up outside. It's sitting in the dining room.

No, we are not really going to murder our spouse. What we have done is recognize that living with another human being is tough. And when you tack on the 24/7, til-death-do-us-part nature of marriage - well, you see how the strangling and murdering comes into play.

That bike, sitting in my living room, is a sign of my holiness (or truly, lack thereof.) It cost way more than I would have spent on it. It's been a constant item in the apartment for the past two years; he shuffles it around. I would love to sell it and put that money towards debt. But it's not going anywhere.

See, it's not just a bike. It's my husband's dreams, past and future. It's a way of life he's enjoyed. He gets to decide if, when and how the bike leaves his ownership. And I support him fully in that.

Spouses - if their marriage is going to be successful - have to put up with bikes in the dining room, or pink wallpaper in the bedroom, or snoring, or being untidy. Yup, there are things you roll your eyes at, maybe even argue about (stop doing that; it's bad for your marriage.) These things are not important to you, or at least not as important to you as they are to your spouse. And you have to let it go.

My mom always said the key to a good marriage is learning to keep your mouth shut. There is great wisdom in that. There are also great marriages that bear fruit because of that.