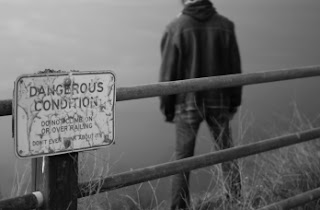 We lost a priest this week. We lost a young priest. Worse still, we lost him to suicide.

By all accounts, Fr. Evan Harkins was a wonderful priest. He loved serving his parish, loved the sacraments, loved our Blessed Mother. He was close to his own family and his grandmother was thrilled that he had fulfilled his childhood dream of becoming a priest.

What happened to this young man? What caused the spiral that ended in suicide? It seems that Fr. Harkins had some stomach issues, and had been prescribed some medication. (Some of this comes from a PDF; I'll try to link it here.) The medication, it seems, can cause anxiety and suicidal ideations, which apparently it did in Father's case. In a matter of weeks, he went from his normal self to suicide.

The change did not go unnoticed. Fr. Harkins, just prior to his death, had made a retreat with a group of Benedictine Sisters whom he knew. Both the Sisters and the chaplain noted changes, but Father left his retreat early without telling anyone, and he was soon dead.

Dear Husband and I discussed this today. People are using this as an opportunity to talk about suicide awareness, to talk about noticing changes in loved ones. Hubby just finished a workshop on mental health as he coaches high school soccer, and my own mental health issues have made us sensitive to the topic.  Clearly, Fr. Harkins case was unusual, in that it was an issue with a medication, but it wasn't unusual in that the outcome was sadly common: a young man, feeling wholly isolated and scared, took his own life.

Fr. Harkins had many, many people who cared about him, and (I'm assuming) those people would like to go back. They see in hindsight what they could not see in foresight: the appetite that is off, the pain behind the eyes, the sleeplessness, the great sadness. It's more than just a "blue mood" or being "off" for a day or two. It's knowing now that you should have said something, should have known that there was something wrong, should have gone with one's gut. But there's no going back.

Catholics have a bit of a storied history with suicide. It wasn't that long ago that those who died by suicide could not be buried in a Catholic cemetery; suicide was regarded a mortal sin. Now, it is viewed with more compassion - those who die by suicide are seen as suffering from something from which they may have little control. As our society's understanding of depression has improved so too has our faith's.

What should you do if you are worried about a loved one? Talk to them. Tell them your concerns and why you have them. Be specific: "I noticed you haven't been eating well" or "You seem so down lately." Ask how they are doing. Then let them know you think they need help and offer to go with them. Offer again the next day and keep offering. Enlist another friend or family member if necessary. Keep talking and make it apparent that you are not judging, but you are there to stay as long as they need you.

I don't know if Fr. Harkins family or friends could have done a thing. I certainly am not standing in judgement of any of them. But damn, people, we don't need to lose another brother or sister to suicide. Let's be vigilant and hopeful.